No Two Chairs No Waiting Podcast this week. 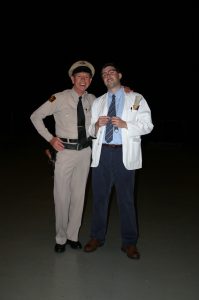 Back Stage at the Grand Ole Opry

There will be no episode of Two Chairs No Waiting this week.

I have a meeting at church on Monday night so I won’t be able to record an episode this week. The next episode will be number 249 so it is Big!

Tune in next week on Monday (26 August 2013) night at 8pm ET for the recording of the episode that will match the number of episodes The Andy Griffith Show had during its run… 249.

See you in a week!

You are invited to join a live conference call meeting to record the next episode of the Mayberry Bible Study Podcast. Below is the information you’ll need in order to be able to connect with the show.

I hope you can find time to join us because I very much value your comments and being a part of the live recording gives you a chance to be part of the Bible study.

The lesson plan can be downloaded from:
http://iMayberry.com/biblestudy/aunt_bees_medicine_man_2.pdf

Please be in prayer that the recording will go well and we can see this podcast grow and touch people in a great way.

Please phone in so you can be part of the conversation.

Welcome to the new iMayberry.com/Podcasts

Two chairs…and I’ve got the magazines to swing it!

iMayberry.com is launching a podcast. I know…the living in Mayberry should be easy and slow but even in Mayberry folks listened to the radio. These days podcasts are becoming almost like radio and since iMayberry.com has had sound clips and cast interviews online since the 1990’s I felt it was time to join the world of podcasting.

Two Chairs No Waiting will be a podcast about The Andy Griffith Show and all things Mayberry. There will be interviews, Q&A sessions (hopefully) and a lot of Mayberry fun.

I hope you’ll join us and give a listen as we move out in this new direction. It will be a bit longer before the episodes begin showing up online but I plan to do several episodes upfront before I post any of them so *maybe* I can actually keep the podcasts coming on a regular basis.

Brought to you by:

If you enjoy all the Mayberry content Allan is providing, support him at Patron to show you value this content.

For one-time or recurring donations through PayPal, use the button below.